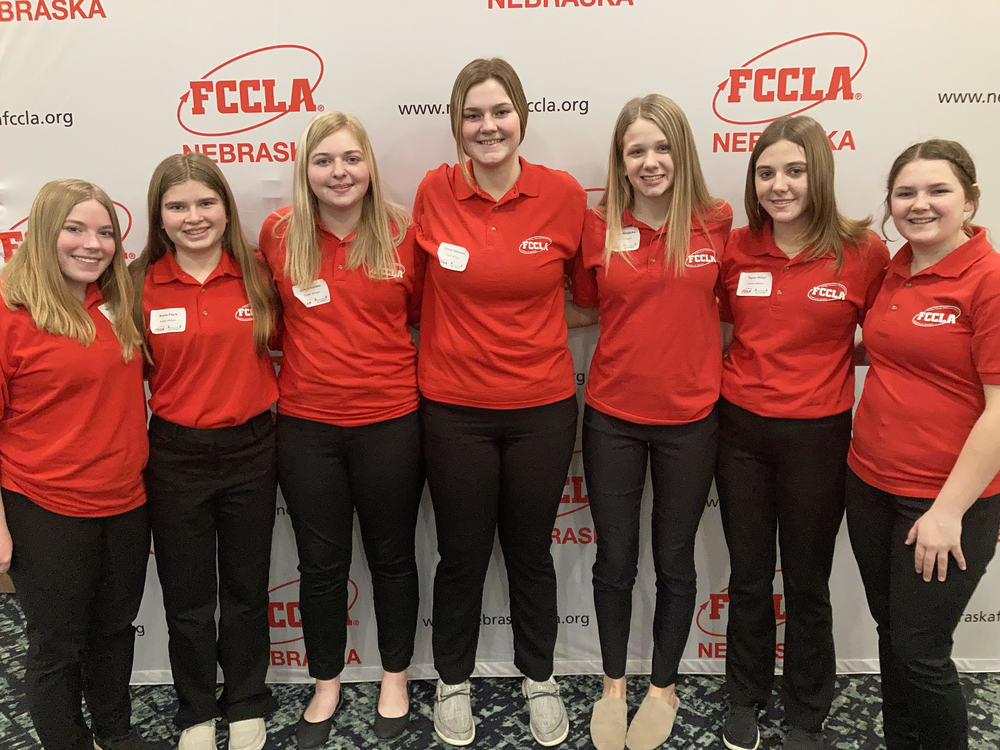 Over 400 FCCLA members and advisers from across the state attended the FCCLA Peer Education Conference in Kearney at the Holiday Inn on Monday, February 28.  "Small Changes, Big Impact" was the theme for the conference that was planned and led by members of the State Peer Officer Team.

During the opening session, members of the State Peer Officer Team were introduced and shared information about their National Programs.  Finalists for the Family Leader, Career Leader and Community Leader State Peer Officer Team were recognized.
Chapters who participated in the Family Leader, Career Leader and Community Leader Outreach projects were introduced.  The Capture the Action Awards and trophies were presented to chapters.  Winners of the Families First Awards were:  1st - Milford, 2nd -  Howells-Dodge, 3rd - Grand Island Northwest.  Exeter-Milligan FCCLA received a certificate of participation for their Trick or Treat so Others May Eat Food Drive.  Chapters honored for the Career Leader Awards were:  1st - Neligh-Oakdale, 2nd - Kearney,
and 3rd Howells-Dodge.  Earning the Community Leader Awards were:  1st - Howells-Dodge, 2nd - Overton, and 3rd - Boyd County.
The winner of the 2022 State Peer Education Team Scholarship was Taylor Svoboda from Mullen.

The keynote speaker for the conference was Maile Ilac Boeder from The Leadership Center in Aurora.  Her powerful presentation kept members active and engaged.  Other session presenters at the  conference were Shannon Olberding of Atkinson, who spoke about Body Positivity/Mental and Physical Health, Vanessa Parra who shared her message on Abusive Relationships.  Members of the Overall SPOT Council Leonardo Luna Duran, Troia Drey and Annie Corkle led a session, as well.

This year's Small Changes, Big Impact Conference Outreach Project
asked chapters to donate items to benefit the S.A.F.E. Center and Compass in Kearney.  Chapters brought 637 items that were presented to representatives from each of those agencies during the closing session.  State President Kaylee Hilbers of Logan View gave a preview of the State Leadership Conference which will be held in Lincoln on April 3 - 5.  State Adviser Chelsey Greene also addressed the group.